What is the Windows File System Filter Driver? 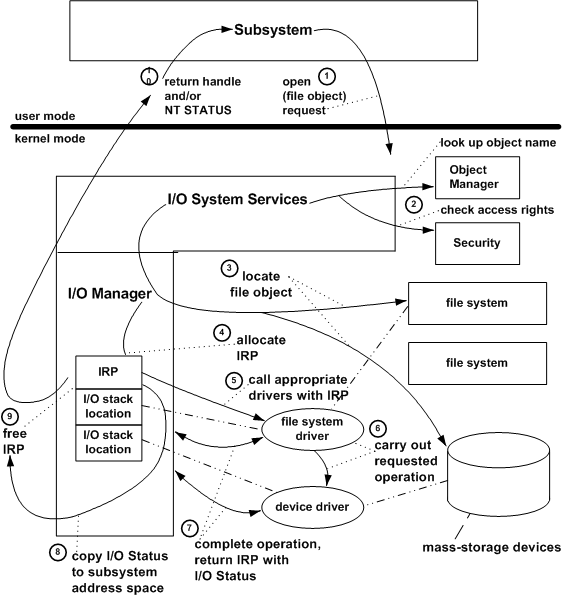 1. The subsystem calls an I/O system service to open a named file.

2. The I/O manager calls the object manager to look up the named file and to help it resolve any symbolic links for the file object. It also calls the security reference monitor to check that the subsystem has the correct access rights to open that file object.

4. The I/O manager allocates memory for and initializes an IRP for the open request. To drivers, an open is equivalent to a "create" request.

6. Both drivers process the IRP and complete the requested I/O operation, calling kernel-mode support routines supplied by the I/O manager and by other system components (not shown in the previous figure).

7. The drivers return the IRP to the I/O manager with the I/O status block set in the IRP to indicate whether the requested operation succeeded or why it failed.

8. The I/O manager gets the I/O status from the IRP, so it can return status information through the protected subsystem to the original caller.

After a subsystem successfully opens a file object that represents a data file, a device, or a volume, the subsystem uses the returned handle to identify the file object in subsequent requests for device I/O operations (usually read, write, or device I/O control requests). To make such a request, the subsystem calls I/O system services. The I/O manager routes these requests as IRPs sent to appropriate drivers.

An awesome feature of the I/O Manager in Windows is that each individual Device Stack may contain one or more filter Device Objects. By attaching a filter Device Object to a Device Stack, a filter driver writer can intercept I/O requests as they pass through the Device Stack. A filter in the file system stack can intercept file level operations before (“pre-“) the file system driver has a chance to process them. Similarly, a filter in the volume stack would intercept volume level operations before the volume driver has a chance to process them.