One of the most common, and also the most powerful, places to insert a filter in a Windows system is over a file system.  File system filters intercept I/O operations (from both applications and the system itself) before those I/O operations reach the file system.  This allows them to monitor, track, manage, manipulate, and even accept or reject I/O operations before the file system gets to see them. The type of file system filter that most people are familiar with is probably the antivirus filter. This type of filter typically intercepts file open requests and suspends them while the filter (or, more likely, an associated service running in user mode) scans the file being opened for viruses.  If any viruses are found, the open request can be canceled.  If no viruses are found, the open request can be allowed to complete normally.

File system filters are commonly used for everything from antivirus and malware scanning as just described, to software license tracking and management, to auditing and changed tracking on files, to on access transparent data encryption and decryption.  File system filters can also be used for other, less obvious, purposes.  For example, because they see which files are created and written, file system filters are often play key roles in backup products and hierarchical storage subsystems.  And because file system filters are able to be the first interpreters of the file system “name space” that applications see, they can also perform powerful file redirection operations, such as making a remote file (such as one stored somewhere in the cloud) appear to be local.

Since its introduction in Windows XP SP2, the File System Minifilter model has become the preferred mechanism for implementing file system filters.  This is for good reason, because the Minifilter model provides an excellent organization and support framework for file system filter driver development.  With reasonably good documentation and a significant set of examples on GitHub, many devs feel that writing a file system Minifilter is well within their ability.  And they’re right… provided they stay within certain boundaries. 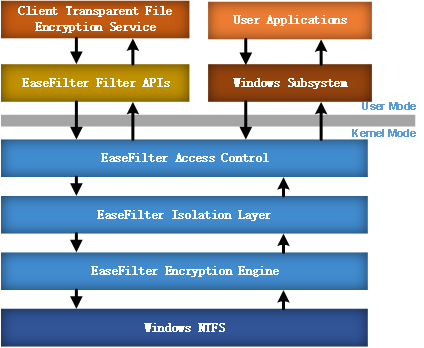 The primary challenges that developers of Standard Minifilters face are:

Properly understanding and dealing with native Windows I/O Subsystem semantics. Properly preserving the behavior of all native file system operations, even the ones they don’t necessarily understand or care about. Of course, this is in addition to the basic challenges inherent in writing any Windows kernel-mode driver.

Overcoming the first of these challenges, that is properly understanding and dealing with native Windows I/O Subsystem semantics, simply requires time and experience. There are numerous Microsoft-provided examples that can be used as a starting point. And the documentation on writing basic file system Minifilters is surprisingly good – Assuming you take the time to read it and understand it.

The complexity of item B, above, depends greatly on the type of Minifilter you write. The simpler you keep your operations, and the more limited you keep your filtering, the easier things will be. For example, it’s usually a mistake to attempt to filter I/O operations that your filter doesn’t specifically care about. The HLK tests for file system Minifilters will be very helpful to you in assessing your success in preserving the behavior of the file systems you filter. Be sure you run them! Thus, if you need to write a Standard Minifilter – that is, one that monitors file system operations – the challenges you face will be reasonable.

The isolation filters separate (or “isolate”) the view of a file’s data from the actual underlying data stored by the file system.  Writing this type of Minifilter is usually as complex as writing a standard Windows file system, because it involves direct and close interaction between your Minifilter, the Windows Cache Manager, and the Windows Memory Manager.  In fact, some experienced devs consider Isolation Minifilter even more difficult than file system development, because when you’re writing an Isolation Minifilter you effectively have to “fit” the implementation of a Windows file system into the API provided by Filter Manager.  Thus, in addition to the challenges faced by the developers of Standard Minifilters, developers of Isolation Minifilters deal with numerous significantly more complex issues.

The most challenge of the isolation filter driver is to handle all the IOs for the uper file object which was sent down by the user, if the upder file object was sent down to the NTFS, the NTFS will blow up in a function called NtfsDecodeFileObject. Developing an Isolation Minifilter is more like developing a full Windows file system than developing a Standard Minifilter, because it requires close interaction with the Windows Cache Manager and Memory Manager. As such, the development of an Isolation Minifilter is not likely to be a task that can be successfully undertaken by most developers who do not also seek to become Windows file system experts.